Even in Hollywood’s Golden Age, when everyone travelled abroad by ocean liner, no major movie ever premiered on a passenger ship.

That changes today when 20th Century Fox’s The Greatest Showman premieres onboard Cunard’s Queen Mary 2, currently docked in Brooklyn. And you’re invited – to the “red carpet,” at least. The film itself, a musical about circus pioneer P.T. Barnum, comes to theaters on Wednesday, December 20.

You can watch the red carpet live – including arrivals by the movie’s stars Hugh Jackman, Zac Efron, Rebecca Ferguson and Zendaya — live on Facebook starting at 5:30 pm ET. Check in at the Facebook pages of AOL, Cunard, Huffington Post, MovieFone, Yahoo or Yahoo Entertainment. 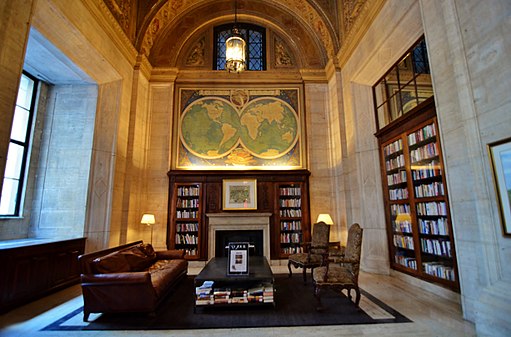 Cunard’s connection with The Greatest Showman extends beyond – and before – tonight’s premiere. P.T Barnum sailed on Cunard ships many times during his life, most notably in 1850 when he invited legendary opera singer Jenny Lind (the “Swedish Nightingale”) to join his show in America. They sailed from England to New York, with almost 40,000 fans greeting them on arrival. In addition, the movie includes some scenes shot in the cruise line’s original US headquarters at 25 Broadway in lower Manhattan (right, the building’s lobby and great hall, photo by Gigi Altarejos).

Les Luchter is a former managing editor of Multichannel News, editor-in-chief of Cable Marketing, and news editor of Broadcast Week.